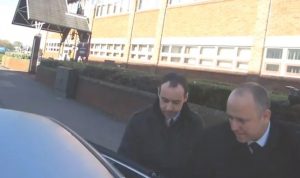 ESSEX Police has been praised for its transparency over the case of it’s then chief inspector, Ben Hodder, who was convicted and dismissed for serious sexual misconduct.

The comments come as part of a report from Her Majesty’s Inspectorate.

Earlier this year, the chief constable of Essex, Steven Kavanagh came to Thurrock Council and personally apologised for the case of Ben Hodder.

The case of Ben Hodder was a story that YT broke. YT found Essex Police to be helpful, professional and sensitive to the needs of all concerned.

“Essex Police has a good understanding of the scale and source of the problem of abuse of authority for sexual gain. They assess that there have been 51 cases that may have included abuse of authority since 2010. From the cases handled under the aforementioned Operation Pershore, both an offender and victim profile have been developed. These enable the force to focus on prevention and proactive work.

“Completed cases from Operation Pershore are also used in training and are discussed at the anti-corruption and integrity board. The force has issued two bulletins to the workforce concerning the abuse of authority for sexual gain in August 2015 and again in July 2016. HMIC viewed the guidance and found that it was comprehensive and included clear advice on establishing professional boundaries.

“The force has supplemented this information with numerous messages via the intranet including one called ‘know your boundaries’, which included the following warning:

‘To establish an inappropriate relationship is an abuse of your position and a breach of the ‘Standards of Professional Behaviour’ for police officers. It may amount to gross misconduct for police officers and staff, resulting in serious disciplinary action. In some circumstances the breach may even constitute a criminal offence of ‘misconduct in public office’.
25

“As a consequence of the dissemination of this information, knowledge among officers, staff and supervisors was very good, with the expectation that all relationships arising from contact with a member of the public in an official capacity must be reported to supervisors. These relationships are then referred to the PSD. HMIC reviewed a number of specific misconduct cases which had been completed and found that they had been handled appropriately by the force.

The force publishes the outcomes of misconduct hearings including cases of abuse of authority for sexual gain and serious sexual offences to the public. In a recent case, a chief inspector was dismissed from the force for serious sexual misconduct for which he received a suspended prison sentence. The force published the full details on the force website and by Twitter and ensured that the local media was able to quickly and accurately report the facts. The force therefore engages positively with the public regarding the outcomes of misconduct and corruption cases, but HMIC considers it could do more to rebuild the confidence and trust of affected groups and the wider community and thereby mitigate the impact of negative news stories both externally and internally.

“Being a police officer is a privilege and it’s crucial that we use and are seen to use our policing powers fairly and with respect. Modern policing also needs strong leadership throughout the ranks to embed the values we need the public to experience when they encounter us.

“The reports highlight that we are working hard to improve the public’s confidence in us and to ensure victims of crime are satisfied with the help we provide. We also attach great importance within the force to embed the fairness and ethical conduct that I know the public expect of us.

“I am pleased the reports have set out the good work we’ve been doing, but I will never be complacent about policing and safety in Essex. In Basildon last week I spoke to people who are rightly concerned about their community and I know that concern is shared in other parts of the county. These independent reports tell the public what we’re good at and show that we have never been better prepared to respond to those concerns while prioritising the incidents that cause most harm.”

Commenting on the HMIC inspection reports on leadership and legitimacy, Essex Police and Crime Commissioner Roger Hirst said: “I am encouraged to see two positive inspection reports showing the progress Essex Police is making in developing its leadership capability and in its approach to treating the public of Essex and victims of crime with fairness, dignity and respect. This demonstrates that under the leadership of Chief Constable Stephen Kavanagh, Essex Police is taking real strides forward in becoming a police force that listens to the public and puts victims first.

“I recognise nevertheless that more needs to be done to give the public greater confidence , particularly in relation to local policing and in ensuring that the diversity of the workforce of Essex Police better reflects the communities that it serves. These are important issues that the Chief Constable and I take very seriously. I will continue to provide both support and challenge to ensure that Essex Police continues to improve in these key areas.”