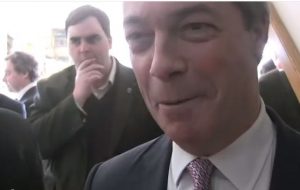 FOR many years, we observed Nigel Farage coming to Thurrock. We have seen him in Purfleet, South Ockendon, Grays, Tilbury and Stanford-le-Hope.

On the last occasion, we saw him striding towards Civic Square in Tilbury where he would meet the assembled throng of the UKIP faithful.

We thought then that there was a remarkable relationship between Mr Farage and the Thurrock UKIP activists. But it did remind us of the relationship a patrician would have. You half expected to doff their hats.

Then again, the relationship looked even stronger in South Ockendon a couple of years ago. There were people there in tears thanking Nigel Farage for “Getting their country back”.

So, how will they feel about the former leader’s remarks in an interview in the Daily Telegraph, that he is having a ‘great time’ since quitting as Ukip leader because he no longer has to deal with ‘low-grade people’ every day.

The 52-year-old said that leaving the role means he does not have to associate with people he would never choose to have a drink with or employ.

He also added that he is relieved to not be responsible for what the party’s ‘branch secretary in Lower Slaughter said half-cut on Twitter last night’.

Anyway, Nigel, if we never see you in Thurrock again: Here were your best bits……