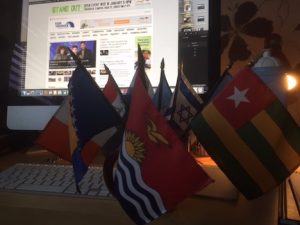 “Dealing with Ukip is like trying to play chess with a pigeon. Even if you win within the rules, the pigeon will clutter up the pieces, and finally it will s**t on the chessboard, leaving you to deal with the mess.”

I have no desire to revisit the flags furore which erupted after I wrote an article in which I implied Ukip may be using the national emblem as a political weapon. But before I put this issue aside I must deal with the misinformation Ukip have poured out on social media.

I first thought any differences I had with Ukip over the flags were minimal and centered on when and where the flags should be flown. Whereas I believe the Union flag should only be displayed on Armistice day, on special ceremonial occasions (like the Monarch’s birthday) and on designated days.*

UKIP’s position as I quickly found out was political: they believed they had a right to fly the national emblem when, where, and how they wished to.

Understandably when and how the Union Jack is flown is taken seriously by the British State, and there are clear guidelines laid down which all local authorities must ​abide. Indeed as far as I’m aware there is not a single local or city wide ​council in the UK who would not have taken down ​the UKIP flags, ​thus ​the guidelines are worth briefly setting out. The full version of the rules and guidelines can be read here.​

The national flags of the United Kingdom, ie. the Union Flag and the flags of England, Scotland and Wales should only be displayed in a dignified manner befitting the national emblems. Flags are normally flown from sunrise to sunset but they may also be flown at night, when they should be illuminated.

The flag must have the permission of the owner of the site on which they are displayed this includes the Highway Authority if the sign is to be placed on highway land. They should also be flown from a flag pole.

Only one flag on a vertical flagpole on the roof of a building is permitted.

UKIP ignored all these regulations and guidelines. They had no permission from Thurrock Council to fly the flags indefinitely, and by hanging them from lamp posts they displayed them in an undignified manner not befitting the national emblems. When UKIP refused to do so Thurrock Council had no choice but to take them down.

Looking back, and taking into account the ferocious way Ukip members and supporters have reacted on social media to this issue, I see their response as indicative of how extremists often lash out when they’re criticized or challenged, whether they’re Islamic, or on the far right like Ukip.

These post on the otherwise excellent Thurrock Your Say Facebook page give a flavour of their response:

In a post he has now taken down the UKIP local councilor Jack Duffin attacked Thurrock council officers and workers as unpatriotic and hating their country because they had been assigned the task of taking the flags down.
He went on to say:

‪”I’m embarrassed to be a Councillor in Thurrock Council. Time for them to apologise or resign”.

This was followed by this comment from another member or supporter of UKIP:

“Anyone that is not loyal to this country and its flag should not be allowed to work in the government whether it be local of national government. sack the lot of them as they are not what this country needs or want”.

Thankfully like a breath of fresh air Duffin’s fanatical and divisive comments were followed by the viewpoint of a far more level headed individual.

“They hate this Country because they are taking down flags? Isn’t that a tad dramatic?”

I would challenge any reasonable person to read that facebook page and not conclude some of the comments posted by UKIP and its supporters were clearly designed to intimidate those who disagree with them. As for myself I’m far to old and weary to be intimidated by internet trolls, but I do worry we now have UKIP councillors in Thurrock who will not only tolerate such wretched behaviour in their own ranks, but also participate in it.

When I read Ukip’s bile and hate I’m reminded of the words of Abe Lincoln when he took aim at the ​political rascals and schemers of his age​.

* As to the England flag as I wrote in my blog I well understand why England supporters may wish to hoist their flag when their national team is playing. I would add to that it can also be flown on St George’s Day.