Fly-tipping “Going through the roof” in Thurrock says councillor 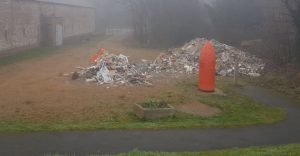 RECENTLY, the portfolio holder for the environment, cllr Pauline Tolson told assembled councillors that fly-tipping in Thurrock was going through the roof.

It seems that a day or week does not go by without a picture being shared on social media regarding fly-tipping.

And it appears there is a danger that it could undermine all the hard work that Thurrock Council have undertaken in their “Cut It, Clean It, Fill It” campaign.

Cllr Tolson advised residents to make sure they know who is taking on work in their house, if it is work that will necessitate rubbish being taken away.

When asked if she knew how was responsible, cllr Tolson said that she was at a meeting where the police said it was “travellers who worked in London but liked to live in Thurrock”.

She did say that she has asked for additional CCTV cameras but has not had a reply from council officers.

The pictures attached to this story is from the grounds of the Purfleet Heritage Museum.