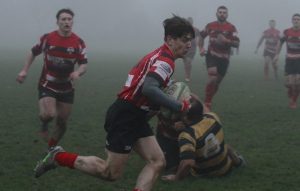 Stanford saw through the fog to close 2016 with an emphatic home win over local rivals Pegasus Palmerians.

STANFORD started the game off at a quick pace and pressurised from the kick off. From the resulting scrum, the pack drove forward and after a couple of phases hooker Kevin Foley powered over the line. Skipper Calum Reid was just off with the conversion.

Some quick passing and silky footwork from the backs saw Full back Jamie Lake over the try line shortly followed by Gary Burke once again putting his name on the score sheet. Reid added the conversion, 15 minutes in and Stanford were 17-0 up.

As the time ticked down Stanford hit a ropey patch and after giving a few penalties away, Pegasus managed to kick three points to start closing the gap.

A brief team talk at half time re-juvenated the Red Men who piled the pressure on early in the second half. Forwards and back combining well to allow space for Jamie Lake to go over for his second. Stanford could see that Peg were tiring and with reinforcements on the bench. Harry Tillet and Luke Tyson made way for Troy Elkes and Ash Smith.  Dominic McDonald was next over the line, shortly followed by Rickie Percival. Reid adding both conversions to make it 38-3.

A scrum on the opponents 22 and some intelligent decisions from the backs saw Jared Gounden break through a clear gap to score.  Three more tries were scored by Dominic McDonald, Jack Kenworthy and Neil Cockrel, all converted by Calum Reid. Pegasus were still strong in attack and did not give up. The last 5 minutes of the game were spent camped on the Stanford 5 metre line and if not for some resilient defence they would have surely scored but on this occasion, for them, it was not meant to be. 10 tries and 8 conversions meant the final score was 66-3 to Stanford.

Man of the match was Dominic McDonald.

Stanford now have a break for new year and will be back in league action on the 7th January at Home to Old Brentwoods.