PASHA arrived in the UK in 2011 as one of the professionals on STRICTLY COME DANCING. His first celebrity partner was Chelsee Healey and they became the nation’s favourites when they were runners up to the coveted title.

In 2012 he danced with Girls Aloud star Kimberley Walsh and was once again Runner Up. In 2013 Pasha danced with Countdown presenter Rachel Riley before finally winning the trophy in 2014 with television presenter Caroline Flack.

After the huge success of his ‘Life Through Dance’ and ‘It’s All About You’ tours over the last few years, Pasha will be joined again by his spectacular dancers including special guest Anja Garnis in an evening of LIVE SINGING, DANCE, CHATTING AND FUN.

He’s also offering competition winners a chance to ‘meet and greet’ him after the show, and also Q&A sessions at the Theatres before the show for those who buy tickets before December 31 – please speak to Theatre with regards to availability and terms.

It’s a hugely interactive show and reaches out to the local dance communities as well as entertaining fans of Pasha, Dance and of Strictly Come Dancing. 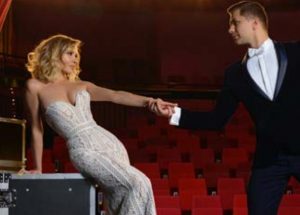