With performances running till Sunday 8th January, audiences have consistently continued to pour through the doors since the opening show.
Daniel Wainwright, a local company director understands why it has been such a successful show, having visited the show twice – “I went along with my family on the opening night, it was such a great show; we have come again!” he said. “I can really understand why it has proved so popular, I’m sure every show will continue to sell well for the remaining performances as this pantomime is a real treat for everyone; no matter what your age.”

Polka Dot Pantomimes Producer Darren Maddison said “It is a fantastic achievement and testament to the amazing talent and dedication of the cast, crew and theatre staff, a production like this involves the whole community and what better way to support the local community than watching a Christmas pantomime.”

Peter Pan stars X Factor runner up Marcus Collins in the title role, alongside a wealth of talent from across the UK. James Austin Harvey plays the villainous Captain Hook whilst local star Luke Coldham keeps audiences laughing as the hilarious Smee. Charley McLaren plays the impish Tinkerbell, Melissa Coleman plays Wendy and Fiona Sim portrays Persil the Mermaid! Acrobatic pirates, amazing flying effects and a large dose of fairy dust have kept audiences amused and enthralled in the most spectacular and ambitious pantomime ever staged at the Thameside Theatre. 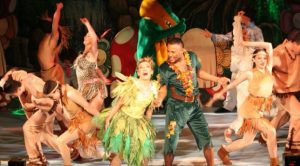 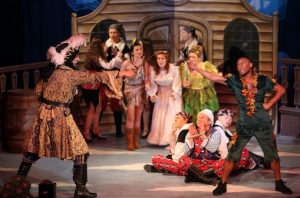 If you haven’t already seen the show then don’t despair – there are still tickets available for selected shows. So Hook your tickets now by calling the Thameside Theatre Box Office on Tel: 0845 300 5264 or online at https://www.thurrock.gov.uk/events/peter-pan