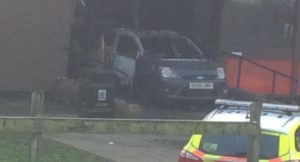 FIRE Crews were called to a fire at East Tilbury library.

Initial reports were of a car on fire, but once on the scene firefighters reported that a car had reversed through the front doors of a commercial building and was alight inside the building. The building was 25% alight and 100% smoke logged.

Firefighters quickly reassessed the incident and worked to extinguish it by 5.29am.

The building, which mainly contained books, has suffered both smoke and fire damage and many of the books inside have been destroyed.

The cause has been recorded as deliberate and offers will work alongside the Police later today to carry out further investigations.

The library contains the prestigious and much treasured Bata collection. We will try to ascertain whether any of that has been damaged.

We have been in contact with Thurrock Council who are looking into it.