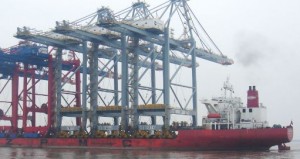 THE first rail freight service from the UK to China departed on a 7,500-mile journey from Stanford-le-Hope today (Monday).

A DB Cargo locomotive will leave the DP World London Gateway rail terminal in Stanford-le-Hope for the city of Yiwu in Zhejiang province, eastern China.

After going through the Channel Tunnel the train will pass through seven other countries before arriving on 27 April.

These are France, Belgium, Germany, Poland, Belarus, Russia and Kazakhstan.

The operators say it is cheaper to send goods by train than by air and faster than by sea.

The service is part of China’s One Belt, One Road programme of reviving the ancient Silk Road trading routes with the West dating back more than 2,000 years.

“DP World London Gateway, one of the UK’s largest logistics hubs, is designed and developed to ensure products can be both imported and exported from the UK via ship or train in a faster, safer and more reliable way than ever before,” he added.

“We look forward to enabling and facilitating more trade between the UK, China and the whole world.”

The first rail freight service in the opposite direction, from China to the UK, arrived three months ago.

He said: “Thurrock is steeped in history – and this moment will certainly be one for the books. I’m incredibly proud to have been involved.

“Today marks a momentous occasion where we are now transporting goods around the world in a sustainable, and in my opinion, under-used method of transport. Thanks to the Local Development Order provided to London Gateway, Thurrock is at the heart of a major new trade route between the UK and China.

“Thurrock is absolutely cementing itself as the nation’s hub for logistics, with state of the art technology, a tremendously skilled work force and a Local Authority who embraces change, improvement and regeneration – Thurrock is rightly being recognised as the gateway to ’all the peoples of the world’.

“Today marks the beginning of a 21st Century Silk Road – which starts right here on our doorstep.”