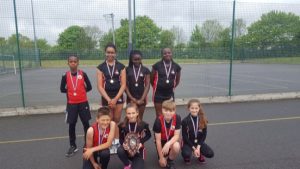 The pupils of Thameside Primary successfully beat tough competition from seven other schools in the area to become the overall Thurrock Champions.

In order to become Thurrock Champions the Netball team had to fight off stiff competition from five other schools in the first pool. As Thameside won their pool, they went into the Semi-final against Dilkes Academy which they won. Which meant they were into the finals of the Thurrock High Five Netball Rally against Woodside. Woodside were tough competition but Thamside came out of the final victorious with a win of 6-0 making them Thurrock champions.

Miss Griffiths, PE teacher at Thameside stated that “Well done to the Year 5 and 6 pupils that represented Thameside Primary school at the High five netball team. They all played some outstanding netball and this was shown by the fact that they did not lose one game. The pupils have done themselves and the school proud!”