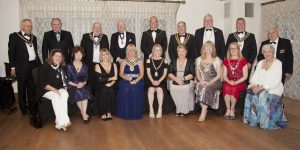 A DINNER celebrating the work of Thurrock’s Mayor was held at Orsett Hall last Friday (5 May).

Cllr Cathy Kent became Mayor of Thurrock in May 2016 and the dinner marks the end of the Mayoral Year.

Councillors and senior officers from Thurrock Council were joined by distinguished guests including Mayors from other boroughs, the High Sheriff of Essex, the Bishop of Bradwell, the Mayor’s Chaplin and representatives of the business community.

Community Chest raffle tickets worth £600 were also sold to raise money for charity.

Addressing the dinner, Cllr Kent said: “When I became Mayor I wanted to showcase the beauty of our borough as so many people associate it with heavy industry or the Lakeside Shopping Centre.

“In my mind Thurrock is the heartbeat of Essex. Yes the industry and Lakeside have placed Thurrock on the map, however, there is so much more than just these two things.

“We also have beautiful parks and open spaces such as Belhus Woods, and Chafford Gorge, as well as heritage sites like Coalhouse Fort and the Old St Clement’s Church to name just a few.”

Speaking after the event, Cllr Kent said: “It was an honour to be elected Mayor of Thurrock and I have thoroughly enjoyed meeting so many residents across the borough.

“In the past year, I have attended around 250 events and it has been a great privilege to serve my borough. I want to thank everyone who has supported me in the role.”