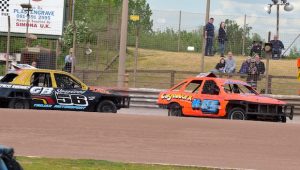 GEORGIE Boult Jnr, a man with plenty of Stock Car experience from other formulas around the country, stepped into the domestic 2.0L Stock Car class at Arena Essex on Sunday and so very nearly won the Final after a sensational race.

In a very hard hitting affair Alfie Jones moved into the lead after battling through the pack. Boult tracked Jones down and was in striking distance into the last corner and made an attack. Jones was sent spinning, causing chaos amongst the following backmarkers, Unfortunately Boult had the throttle cable pop off when he hit Jones so all he could do was coast towards the flag whilst being battered by the following pack. In the confusion it was Don West who managed to find the gaps through the wayward machinery to get across the line first, whilst double heat winner, Billy King inherited second and Nick Glover third. Boult salvaged fifth, Jones a lowly 10th.

Jones was also in action in the latest round of the Micro National Banger World Series, but his luck was no better there. Jones found himself the subject of a lot of attention from the visiting TMT team. Gary Lee turned around and drove at Jones on a couple of successive laps before Jones decided to take matters into his own hands and turned his car around to strike Lee first. Unfortunately he then took a very heavy and dubious T-Bone into the armco, a move usually frowned on in Banger racing.

To make matters worse for Jones, his closest rival in the series, Bradley Lee, had a very good day, which included winning the final and the allcomers race. Other winners were Aaron Harris and David Dawes.

Rayleigh’s Kevin Harland raised eyebrows with his choice of a Suzuki Wagon for the meeting and he survived four laps before being thundered into the armco by Tony Hutton. It was apparently four more laps than he usually lasts so Kevin was happy, even managing to repair the car, to a fashion, in time for the Destruction Derby, although his car broke again before the green flag!

The weight of numbers told in the Destruction Derby with TMT team mates, Ricky and Tony Hutton and Bill Crittenden left to fight it out amongst themselves. Ricky Hutton eventually outlasted his team mates to take the win.

Wade had shown fighting spirit in the two preceding heats, taking to the unfavoured outside line to attempt to pass the leading car of Jamie Lee Potter. He nearly made it past on a number of occasions but just failed to gain the extra few yards he needed to be able to pull across the well driven Potter car, the latter clinging on to win the first heat. Heat two was the most dramatic of the day with Jordan Wainwright blowing an engine or a radiator into the first turn, coating the bend with enough fluid to make a repeat of the previous meetings pile up a distinct possibility. Tyler Scott and Carl Shackleford were the unfortunate ones that headed fencewards, Shackleford in particular taking a lot of damage. Michael Seex lead the restart but a number of cars were pushing him into the final couple of laps and he spiked the brakes into turn one and was pushed wide, Wayne Shackleford took the win, with the steward taking the decision that pretty much everyone was at fault in some way!

Girl power ruled in the Junior Mini Stox with Gemma Robins winning the final ahead of Abbie McGuiness, Aaron Totham taking third. Much of the final took place on an incredibly slippery track caused by Lewis Saunders bouncing out of the fence and losing most of his oil. The minis were reaching some crazy angles negotiating the first turn. David Shearing extended his track championship lead with two heat victories.

The next action at Arena Essex is on Bank Holiday Monday 29th May at 1pm. The PRI Bangers return with action also from the Stock Cars, Stock rods and Lightning Rods.

Jones Boult battle : Alfie Jones gets spun by Georgie Boult on the last corner of the Stock Car final. Neither were to win….

Tight finish : A powerless Boult gets passed on the outside by Don West and the inside by Billy King, West bounced off the barrier and crossed the line inches ahead of King for the win.

Harland : Rayleigh’s Kevin Harland gets his Suzuki Wagon destroyed by Tony Hutton (Photo to be accredited to Leiws Clarke-Bull / RacePixels.co.uk)

TMT – Team TMT were the only ones remaining to fight for the Destruction Derby win. Ricky Hutton (623) outlasted his team mates.

All photos, except where indicated, are to be accredited to Matt Bull / RacePixels.co.uk . All rights for reproduction in printed or digital form are granted.