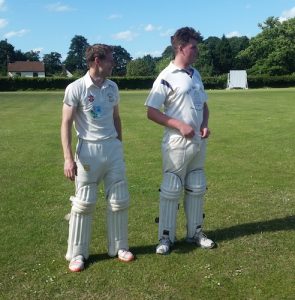 Bentley won the toss and elected to bat on a decent looking wicket but soon regretted their decision. Bentley lost opener Ashley Parmenter in the second over when Martin Sayers produced a sublime catch at gully of the bowling of Stephen Edwards. Connor Hammond also picked up an early wicket nabbing Steve Coleman LBW.

Bentley were struggling to cope with the electric fielding display from the visitors and wickets continued to fall. Hammond and Edwards took another wicket and Bentley were struggling on 35-4. Ollie Gordon was next to go to a one handed diving catch from Scott Plom off skipper Jeff West Jnr, and the impressive Dan Stone picked up 2 wickets at the other end. There was no let up from Horndon and Ryan Madder was too good for the Bentley tail enders.

A brilliant fielding and bowling display from Horndon and the home team were all out for just 94 runs. Horndon’s openers Tom Stone and Jack Walsh made quick work of the total. A fine display of big hitting from Tom Stone and quick singles from Walsh quickly took any optimism from the home side.

Horndon chased the total in just 20 overs for the loss of no wicket. Stone finishing 76* from 61 balls and Walsh 17* from 57 means that Horndon are winners of the Essex and Suffolk Area Group. They now move into the Regional stage of this historical competition and welcome the Winners of the Kent Area group Linton Park at The Rec on Sunday 25th June. Horndon Captain Jeff West Jnr was overjoyed with the win and thanks everyone who came to support the team.