RESIDENTS packed the public gallery in Thurrock Council’s Civic Chamber in Grays on Thursday evening to hear plans for a major new housing development on their doorstep debated.

After more than 90 minutes of discussion the nine members sitting on the council’s planning committee were split, with five voting against the development and four supporting it.

Plans have been put forward for up to 280 new homes on land which forms part of Little Thurrock Marshes.

Planning officer Matthew Gallagher confirmed the site was in Green Belt and that the development would be “harmful to the Green Belt and detrimental to open space” but the harm in principle was outweighed by other considerations.

He said the balanced judgement of officers, who had considered 17 factors submitted by the developers in support of the application, was that the special circumstances put forward outweighed harm to the Green Belt.

Mr Gallagher also outlined issues related to possible flooding, conceding the site was in the flood plain and “at risk” from a one in 250 years event!

He added: “We have given this consistent, balanced consideration in reaching our decision but in the end it’s a matter for you, the decision-makers after taking everything into consideration. Our view as professional officers is that issues are resolvable. It is a straightforward Green Belt decision which is yours to make. It’s a judgement call. The Green Belt is the elephant in the room.”

Some residents in a clearly split public gallery raised placards against the scheme when their spokesman addressed councillors. 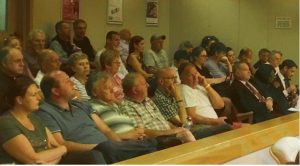 Cllr Gerard Rice said: “We need homes within the borough and I can see within this application there are 98 units of social housing. At the end of the day we have 8,000 people on our housing waiting list and here we have a developer making the maximum number of social homes, 35 per cent, available.”

Cllr Graham Hamilton was left a little red-faced and drew groans from the gallery when he started talking about the site being the location of the former Calcutta Club in Tilbury.

He showed further unfamiliarity with the site and sought clarification about where parts of it actually were, asking “are they just thin bits on a map?” but he bounced back with questions about how the developers might handle waterways running through the site, and was assured it would be done sympathetically.

He also warned that councillors should not support the scheme just to avoid facing big costs if the issue went to appeal.

Cllr Hamilton’s UKIP colleague Cllr Graham Snell showed much more detailed knowledge of the site, raising the issue of flooding that he knew of in the past in the area and he wondered if the risk had properly been taken account of.

Mr Gallagher said that some parts of the site would be raised to take account of the flood risk and that risks had been mitigated, though there were various types of risk from fluvial (river) flooding which occurs through excessive rainfall and tidal flooding. However, the Environmental Agency had taken the risks into account and raised no objection.

Cllr Roy Jones said he felt that there were “once again” far too few parking spaces throughout a new development in the borough, in particular emphasising that flats had just 1.2 parking spaces. “We are going backwards on this”, he added.

Residents spokesperson and chair of the action group against the scheme, Tony Coughlin, called on councillors to reject the scheme, saying: “Enough is enough.”

He said the information given to councillors by officers was incomplete and unbalanced, saying there was no reference to issues including noise which would make residents’ life a misery. He also highlighted the issue of land movement, saying utility companies were regular visitors to the area because of fractured mains and energy lines and asked why the impact of that had not been considered.

“There have been a number of applications on this site over a number of years and they have been rejected. Much has been said tonight about the Green Belt – how much longer are we going to allow GReen Belt land to be eroded away,” he said.

He also highlighted traffic issues, saying the site was served by one road – already the site of regular accidents including three cars being written off – which has 800 movements a day, under the new scheme that would double to 1,600 cars using the same road.

Ward councillor Cllr Bukky Okunade also spoke against the development, saying: “This will definitely affect residents’ lives. I am aware the developers have made points in support of the scheme but the objections still exist. This application should be refused because of the physical change it will make to the area and take away open space.”

Speaking for the scheme, the developers’ agent Ben Rogers repeated many of the points made previously by officers and spoke of the significant benefits the scheme would bring to the economy of the area and support for the local community, including schools and he urged support for the scheme, drawing support and applause from some members of the public gallery which emphasised the split views and opinions on the scheme that had been concurrent through all the evening’s discussions.

During the debate that followed Cllr Tunde Ojetola told the meeting he was minded to vote against the scheme because there was no provision for replacing the lost Green Belt, but Cllr Gerard Rice countered by saying that it was a judgement that had to be made and that the experts who had considered it had raised few objections, and some – including the council’s education department – had spoken of the benefits it would bring. He concluded: “We have to face it, we will have to release some Green Belt for development. People have to live somewhere. We do need to provide homes.”

Cllr Hamilton summed up his thoughts, saying: “I am fearful of the domino effect, one thing will lead to another, and then to another as Green Belt is taken away. I feel we are being nudged to go in a certain way but I am against this because of where it will lead.”

Cllr Snell said: “This development sets the bar way too low, there will be developments with special circumstances that we can consider but not this one. I can see no good reason for filling in this Green Belt area. It is only a little bit of Green Belt but it is an important buffer.

“I am also concerned about the access issues through Churchill Road.”

Cllr Steve Liddiard said: “I have to go with the young families who need housing. I know we need Green Belt and it is important but we need housing”, a sentiment that was echoed by Cllr Colin Churchamn who said he would be supporting the proposal.

Cllr Roy Jones said he would be voting against it because it was important to keep a buffer between towns.

Cllr Piccolo said he was minded to vote against the scheme because if it was approved it would see the easier erosion of Green Belt in the area by developers, who would get land on a plate because the bar had been set too low.”

Cllr Ojetola shared that view and also spoke of a “bar being set too low and handing a land to developers on a plate.”

Mr Steve Taylor, who represents the Campaign to Protect Rural England, spoke against the scheme and said it was important to stop urban sprawl and that he did not think there was enough mitigation to support the scheme.

Cllrs Rice, Churchman, Liddiard and chairman Tom Kelly voted for the scheme, but were outvoted by Cllrs Hamilton, Jones, Ojetola, Piccolo and Snell.