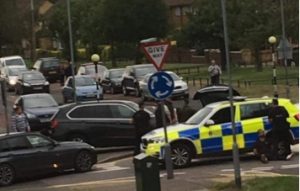 THERE were dramatic scenes in South Ockendon on Thursday night after a police swooped on a driver who they suspected had a firearm.

An Essex Police spokesperson said: “Police received information a firearm was seen and stopped a vehicle.

“They checked the car and the occupant.

“No firearm was found and no further action was taken”.