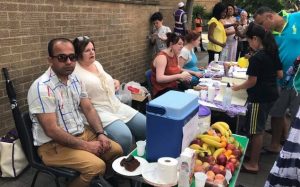 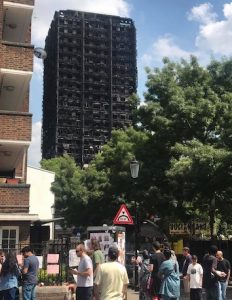 Blogspot: My visit to Grenfell Tower

ON 13 June, I was invited by a friend to a dinner party and came home in the early hours of 14 June. It is my routine to check news before going to bed. As I was preparing to sleep, I quickly scrolled through the news app and saw news and pictures of fire in west London. I was very tired so I slept quickly.

I woke up around 2:20am to do my breakfast for next day fast and I remembered there was news about fire in some flats so I opened the news app and there was a big tower engulfed in heavy fire. There were also dozens of messages on my mobile phone about the fire and safety concerns and prayers for the residents of Grenfell tower. It was not difficult to imagine the catastrophe this fire would leave for the residents. I was really sad and did not have courage to go and see the destruction.

I was invited to watch ICC Championship’s final match between India and Pakistan in London on Sunday (18 June). My friend called me on Saturday evening and we planned to visit the Grenfell Tower on Sunday instead of watching match. We took cooked food with us and set up a stall there. The atmosphere was cheerless. There were thousands of people of all ages, colours and backgrounds but all have something common; sadness and tears. Thousands of cards, pictures of missing persons, candles, and flowers were everywhere which showed the number of people visited this site. Pastors, imams and volunteers were there to provide spiritual and emotional support. There were also various long queues on condolences-book stands.

I met eye witnesses and grieving families. According to witnesses, there were lot of Muslims who were praying in their local mosque and when they were returning to their homes, building was already on fire. Their families were trapped inside crying for help and they were helpless. Some were able to go inside and helped lot of people and brought them to safety. It is really heartbreaking just to imagine women and children waving from 20 floor for help and no one was able to help. The grieving families and friends were upset and angry from the government’s delayed response in indentifying the victims. They were also complaining that the media is not reporting the incident truthfully.

My eyes and heart were crying and left the site with broken heart. As I was leaving, I start receiving congratulatory messages of Pakistan’s victory in final cricket match but I had no feelings of happiness left in me. I switched off my phone and drove home thinking of victims and their families.

Qaisar Abbas is a local politician and regularly hosts events on different topics. He was awarded ‘Community Leader’ award by East London Business Community and ‘Peace Ambassador’ award by the London Peace Centre.