Man in court over £1 million cannabis factory in Bulphan 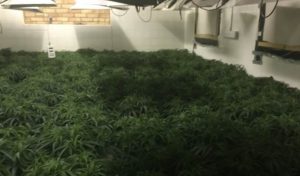 A man has pleaded guilty to being concerned with the production of cannabis worth around £1million after police found 1,307 plants at a property in Bulphan.

Le Van Khiem, 29, unemployed and of no fixed address, was arrested after police executed a warrant on Thursday, June 29, at an address in China Lane.

Police acting upon intelligence found the plants, which varied in growth from infant to adult sizes. The plants were removed and destroyed.

Khiem appeared at Chelmsford Magistrates’ Court on Saturday, July 1, and has been remanded in custody to appear at Chelmsford Crown Court for sentencing on July 27.

Investigating officer, Pc Stuart Clarke said: “This is a significant haul and the cannabis factory was a sophisticated set up.

“If all the plants had grown to maturity, they would have had the potential to reach an estimated street value of around £1.3million.

“Although a man has been charged in connection with this investigation and has admitted being involved in the production of cannabis, our enquiries are still ongoing.

“We’d like to hear from anyone who saw any suspicious activity around the property in recent months.”