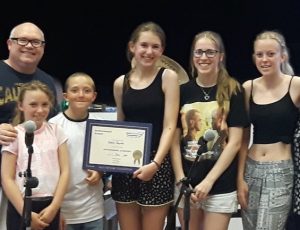 THURROCK Marching Brass is pleased and proud to confirm Isabella Reynolds as the worthy winner of the June 2017 Jack Petchey Achievement Award.
Isabella is an active member of the colourguard, the section that brings the visual elements of both the mobile theatre and the performing arts groups alive.

Isabella is incredibly dedicated to working to the best of her ability, and she has been awarded a British Championship title in the 2016 season. She is a model student here at Thurrock Marching Brass and in our 2017 production, Charlie’s Chocolate Factory, she is featured in parts of the show to bring additional projection. Thurrock Marching Brass hopes to win its fourth British Championship title, since re-launching for youngsters in October 2010, later this year.

Always willing to help others, her young age defies her skills and capabilities and as we embark on another exciting journey with our 2017 production Isabella will once again be playing a significant role.

Speaking of the award, Paul Morgan said, “I was absolutely thrilled to be able to present Isabella with her certificate. I know all the members are working very hard on their 2017 production, and so to take a little time out to recognise all her hard work, dedication and enjoyment was a great moment. To be surrounded by previous Jack Petchey Achievement Award winners just shows how far we have come. On behalf of our Corps

Director, Jay Lindner, his staff, and everyone here at team TMB, I would like to thank the Jack Petchey Foundation for continually supporting the needs and aspirational drives of our young people. You are, and remain, an inspiration to us all.”
Thurrock Marching Brass is proud to perform as much as they can within the community and you can keep up to date with all their engagements on our website below or by following them on Facebook.