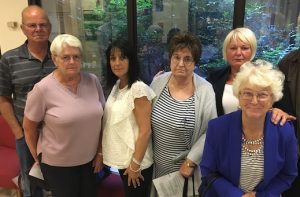 They wanted to see for themselves the discussion on Tory plans to hit them with a new £500-per-year charge. The plans were approved by the Conservative administration.

The residents were not impressed by what they saw. One of the group, Thelma Callender, said: “All the time we’re getting more and more taken off us but never getting anything back! The current state of our housing – we don’t feel safe anymore. We just don’t think we’ll ever see any value out of this new charge.”

Cllr Rice, on behalf of the residents, asked the Tory cabinet for reassurance that any new money raised would all be spent on sheltered housing.

However, speaking after the meeting she said “I think it’s disgraceful that we’re treating our older and more vulnerable residents like this. It’s outrageous that they are the ones being hit with the big new bills for basically the same service they’re already getting. I can’t see that there will be a huge improvement for the residents coming any time soon.”

Councillor Oliver Gerrish, leader of Thurrock Labour, said “When people hear about this new plan, they are outraged. Thurrock Tories are hitting some of the people least able to pay with these new charges.

“Thurrock Labour has been opposed to this from day one. We don’t think this is the right way for an administration to treat its residents. We need to make Thurrock a fairer place and Thurrock Tories have shown they are no longer interested in doing that.”