ESSEX Police has implemented new policing tactics to deter and detect criminal and terrorist activity, as well as to reassure the general public.

The project involves new tactics and cutting edge training for police officers that will help deter those from carrying out hostile reconnaissance and help detect those with malicious intent. It also increases the opportunity for interaction between police officers and the public, provides further reassurance to the public and helps deter and detect other criminal perpetrators.

Hostile reconnaissance is the purposeful observation of people, places, vehicles and locations with the intention of collecting information to inform the planning of a hostile act against a target.

Criminals, whether extreme protest groups, organised crime groups or terrorists, have to conduct hostile reconnaissance in order to plan a successful attack. If we can disrupt and deter them at an early stage, it is likely they will abandon their plans.

Following three years of intensive work and study by a Government organisation, the City of London Police ran an initial pilot scheme which heralded a change in the way police use tactics to deter hostile reconnaissance.

Because of the way the scheme works, these tactics should also have beneficial effects on crime in general.

Following the success of the pilot and some further refinement, the tactics were launched under the name of Project Servator in February 2014.

These new tactics will mean a more enhanced and strategic approach to protecting the county and is part of the force’s drive to deploy its resources more effectively.

Project Servator has been launched at Lakeside shopping centre and Stansted Airport but it is likely to become “business as usual” for the force and will operate across the county.

Along with supporting information and materials, people will see more high profile deployments in and around communities and at key locations. These deployments will vary from one day to the next.

How can I help?

You can make a real difference. If you are in Stansted Airport, please report any suspicious activity you may see by calling the Essex Police control room on 01279 680 298. For Lakeside, please call 101. Please use 999 if an immediate response is required.

As well as being vigilant and reporting anything suspicious, a pivotal part of Project Servator is telling people about what’s happening. It is really important that the public understand the nature of the operations and, crucially, feel reassured rather than alarmed. That’s where you come in.

Providing information will help support the police operations by reinforcing the message that Essex is not an easy target and those intent on criminal activity are not welcome, whilst also allaying any undue concerns of the public.

We would very much appreciate your support by explaining to your customers and employees about the nature of these deployments, specifically that:

They are part of the force’s commitment to help protect our communities and those working and visiting the county.
The deployments will involve highly visible and covert operations that will occur regularly. People shouldn’t be surprised or alarmed if they see a sudden increase of police officers. Small deployments may include just officers while larger operations may include a mix of cars, motorcyclists, dogs and other measures. 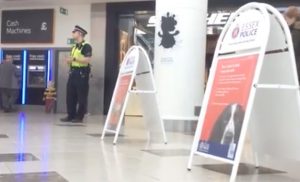 Police officers may visit businesses and community centres during deployments to inform and reassure staff and customers about the operation.
Members of the public and staff should report any suspicious activity immediately either to an officer or by calling 101. Please use 999 if an immediate response is required.