Cricket: Orsett and Thurrock triumph in Under-15 final 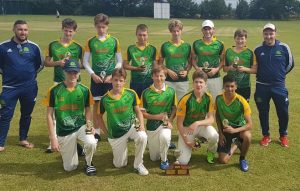 ORSETT & Thurrock Under 15s were crowned South Essex champions on Sunday after a hard-fought battle with last season’s winners Rankins.
Rankins won the toss and elected to bat first. O&T were missing a few of their regular players, but the team set about their business in their normal manner with the Rankins opening pair struggling to get away the swinging balls of Callum Owen and the extra pace of Under 13 Ryan Humphries.

Change bowler Tom Redman then came on and struck in his first over. He had Carter in all sorts of trouble before having him snaffled behind by wicket-keeper George Watson.

Corker was joined by Albon who started to knock the ball around and up the rate. Corker was run out expertly by Owen with a direct hit from deep point.

The rate was now slowing up with Redman and captain Brad Greene bowling tight lines, runs were now at a premium. Sivabalan was trapped in front by Redman, with the spinner finishing with 2-14 from his four overs.
Charlie Arnold and Charlie Best bowled excellently at the death, with Arnold picking up the wickets of Albon for 31 and Nolde for 14.
Rankins limped along to 103 from their 20 overs. O&T knew they were in with a shout at the change of innings.

Redman was elevated up the order in the absence of the normal opening pair who were both unavailable and was joined by under 13 Martin Thorndike.

Redman was first to fall after being run out for 5. With the score on 15, this brought Greene to the crease. There was no addition to the score when Thorndike was next out.

The experienced George Watson came in and set about rebuilding with Greene. With the score ticking over, Greene started to find the ropes with ease, cruising along to 33 and then smashing a massive six to move to 39 where he had to retire.

Arnold and Watson tried to keep the runs ticking over, but from 67-4, O&T were soon 83-6. The two Charlie’s, Arnold and Best, decided the way forward was to attack and with a flurry of boundaries from Best and some aggressive running from Arnold, O&T found themselves on level scores when Best was bowled by Clements with three balls to spare.

In came Rajan Kular. With everyone around the bat, he knew he needed just to find the gap and the trophy would be heading back to School Lane.
He managed to jab the ball between short leg and leg slip and as the batsman made their ground there was joyful scenes from the players, their parents and the O&T senior players who had made the effort to come and watch. The game was a great spectacle and played in a fantastic manner by two very good sides.