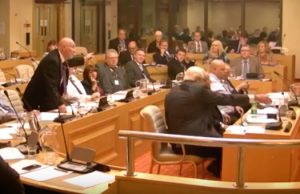 THE DEPUTY leader of Thurrock UKIP slammed a councillor who is also the husband of Thurrock MP Jackie Doyle-Price for goading them during a heated council meeting.

After the campaigners were ejected, UKIP’s cllr Roy Jones rose to this feet to address the chamber and raise his concerns.

He did so whilst cllr Coxshall had left the chamber to, his words, speak to the campaigners.