One injured, three arrests after machete attack in Tilbury 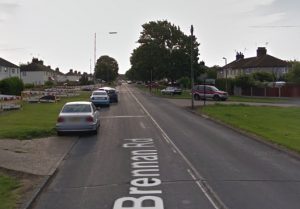 Police were called by the ambulance service at around 9.30pm with reports that a man in his 20s had been attacked with a machete, which was later recovered.

The victim was taken to hospital for treatment for minor injuries to his head and arms.

The man, who was said to have carried out the attack, was described as black, and had a moustache.

He spoke with a lisp, and was wearing a black “North Face” jacket and blue jeans.

Following the incident he made off on foot in the direction of Fort Road.

Keys to a silver BMW were also taken during the incident. The vehicle was not stolen.

A man, aged 25, has been arrested on suspicion of possession with intent to supply drugs, other than Class A.

Another man, aged 18, was arrested on suspicion of possession with intent to supply class A drugs.

Both remain in custody for questioning.

A boy, aged 17, was arrested on suspicion of assault and robbery. He has been released without charge and will face no further action.