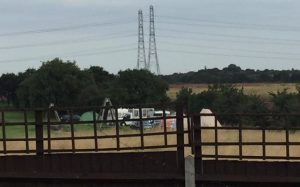 CHADWELL St Mary residents have expressed their concerns at an unlawful encampment.

The caravans appeared on Thursday morning on Wickham Field off Brentwood Road.

Residents have told YT that the caravans are next to the swing park in the popular field and are reluctant to let their children play out.

A number have also expressed their concerns regarding dogs on the camp.

YT contacted Thurrock Council but they have not responded at the time of publication.