Football: Injury time penalty wins it for Blues against Dockers

THE Blues came through a stern test of character against a Tilbury side who pushed them all the way in a closely fought local derby and but for a man of the match performance from home keeper Clarke Bogarde and some wasteful finishing Blues could have been home and dusted inside the first thirty minutes. 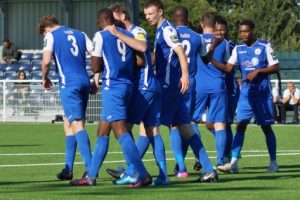 If there was any doubt that it’s not going to be an easy ride in this division they were not dispelled by a Tilbury outfit who battled gamely to the end.

Manager Jamie Stuart serving the first of a two game touchline ban was forced into a change in midfield ,Suleman Zuhdu dropping to the bench with James Folkes replacing him and Ryan Mahal slotting in at fullback.

The Dockers engineered the first opportunity inside the opening five minutes when Vyse who proved a real handful throughout cut inside and fired over.

A cagey opening quarter saw little goalmouth action with the Blues enjoying a deal of possession without causing the Tilbury defence any problems until Bishop did have an opportunity capitalising on a misunderstanding between keeper and defender but Tilbury managed to clear the danger.

It was the bustling Vyse again who probably should have done better breaking quickly but his effort on the run lacked power and Lamar Johnson was able to gather comfortably.

Blues came close to opening the scoring in the 23rd minute when good work down the flank by Joao Carlos saw him cut the ball back to Barry Cogan on the edge of the Dockers area, his curled effort looked destined for the top corner but Bogarde made the first of many fine saves turning the ball over.Minutes later a wonderful interchange of passes between Ade Cole and Cogan saw Cole denied by Bogarde who could only push the ball out to Keirnon Hughes -Mason and with the goal at his mercy he prodded the ball up and over.

Tilbury not to be outdone came close and again it was Vyse who once again got his bearings wrong and blasted over when well placed,the Dockers were looking lively on the break and put in a series of testing crosses putting the Blues back four under pressure which central pairing Glenn Wilson and Perry Dunne dealt with .

Blues still looked liked they would edge in front when Bishop capitalised on an error at the back lobbing Bogarde but the keeper made another great save pushing the ball out of danger.Although enjoying the lions share of possession Blues appeared to be playing within themselves if they could have upped the tempo then goals would surely come.

Hughes-Mason had another opportunity late in the half but once again Bogarde was able to make a smart save .

The second period was barely minutes old when Folkes made a timely interception driving forward he unleashed a powerful shot which just skimmed the bar.A quick riposte by the Dockers saw Vyse drill a fierce shot which Johnson did well to claim under pressure.

Hughes-Mason had a golden opportunity when he was played in behind the Dockers back four and really should have done better with only Bogarde to beat his shot lacked power and accuracy allowing Bogarde to turn the ball behind.

After all the chances Blues had squandered they did finally open the scoring in the 51st minute and not from a flowing move. Tilbury were in possession deep in their half there appeared to be no danger until Bishop did well to close down the man in possession blocking his clearance the ball fell kindly leaving Bishop clear and he cooly slotted the ball past Bogarde .

The goal led to a period of Blues pressure ,a Hughes -Mason shot saw Bogarde make another good save and then Folkes saw his effort fly just over.

Tilbury stung by the goal upped the tempo and Blues had a lucky escape when that man Vyse muscled Dunne off the ball and flashed in a low cross which Johnson failed to hold and the ball was scrambled clear much to the relief of Blues fans.

For a twenty minute period Blues came under pressure after they appeared to lose their shape in midfield ,Folkes and Cole departed to be replaced by Zudhu and Furo Gogo-Ibiama and Tilbury began to create pressure,Vyse again did well turning and firing just wide and then seeing Johnson deny him.

In the 84th minute the pressure told when the Dockers got back on level terms Blues failed to clear the ball from a corner and the ball fell to Aitken who stabbed the ball home.

The goal stunned Blues but to their credit they managed to wrestle the initiative in midfield ,Carlos had an effort blocked and then in the dying moments they were awarded a free kick.The ball was played in to substitute Jamie Slabber who did well to hold the ball up in the area and was then unceremoniously bundled to the ground a clear penalty.Up stepped Bishop who steered the ball past Bogarde and put Blues in front ,minutes later came the final whistle and a great cheer from the Blues faithful.

An open day win and three points in the bag then for the Blues in a game where they were given a glimpse of what lies ahead this season.Blues performance was full of character at times they looked in complete control with some patches of flowing football but they also were also put under pressure from a difficult opponent .It did feel though at times today they were playing within themselves with the only criticism would be a lack of ruthlessness in front of goal.

Wednesday sees Blues entertain AFC Hornchurch in another Essex derby which promises to be a cracking encounter ,Blues will have to be on top of their game ,lets hope Blues fans turn out in force at their new Parkside home.