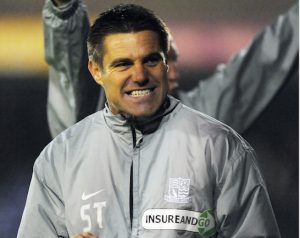 Tilson famously took Southend United to two consecutive promotions in the noughties from League Two to the Championship. He now hopes to use that experience and his expertise to grow the College squad.

Steve, Head of the Football Academy, said: “I’m looking forward to building the Academy up, individually I want to make each player the best footballer they can be. Whatever division they may go on to play in, they all need to have confidence in their abilities.”

He also said he would be calling on his contacts in the industry to offer extra opportunities to those that are part of the Academy.
He added: “Hopefully we’ll have ex-pros coming in to chat with the players plus I can use my links in the game to work with certain members of the squad so they can realise their full potential in football.”

Steve has also acquired the UEFA Pro-Licence, the highest coaching qualification in the country.

The Football Academy Level 3 Extended Diploma helps prepare students for a career in the sporting world. Students learn sport psychology, coaching, fitness and nutrition with a football focus. Players will be training at an advanced level within the National League U19 Alliance.