Investigation to begin into fire at Chafford Hundred building

AS investigations begin into the fire at the derelict site of a huge fire in Chafford Hundred, YT charts the troubled history of the site.

Ever since we started YT back in September 2008, there seems to be questions over the development at Howard Road.

The first person to raise questions to us was South Chafford councillor, Tunde Ojetola. He has done ever since.

In 2011, our camera filmed what was still a derelict or undeveloped site.

In 2012, the then portfolio holder for housing, Val Morris-Cook spoke of her hopes that Thurrock Council could be involved in development of the site that had long become an eyesore.

In 2013, we reported the the Criterion Group had bought the site

By 2016, the mood had changed as it was the nature of the application that concerned local residents. 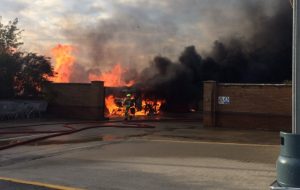