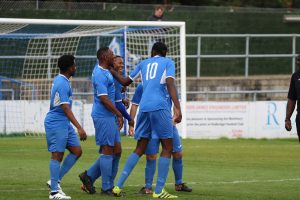 A stoppage time equaliser denied the visitors all three points as Barkingside rescued themselves a point at Cricklefield. Tye visitors led on the half hour when Skinner headed home and it looked to be enough for all three points until Jones slotted home in the 91st minute and denied the Robins victory.

A first half hat-trick from the in form Bowers saw The Bees end Hamlets six game winning run in the league with victory at The Hive. Bowers put the hosts in front on seven minutes with a hard low shot before doubling the lead with a free kick. And he completed his treble before the break to give the hosts a good three points.

Richmond netted a hat-trick as Rovers continued their terrific form with a four goal thrashing against FC Romania. Richmond netted two in the first four minutes and a Butterworth strike on 77 minutes and a third from Richmond with eight minutes remaining sealed a good day at the office for the hosts.

Stansted came from behind to record victory at the Old Spotted Dog against Hackney Wick. The hosts took the lead midway through the first half but The Airportmen levelled just seven minutes later through debutant Hocking-Rising and then found the winner with eight minutes to go thanks to an own goal and claim the three points.

The Motormen ran riot after they hit six at Oakside against Hullbridge Sports. A Moses penalty in the 14th minute set them on their way and it was two only four minutes later through Mytanda after he had strolled through the visitors defence and hit an effort into the bottom corner. Mbamarah then converted a point blank header just past the hour and although the visitors pulled one back early on in the second half through Siemienczuk, further goals from Coxi Sebasfao, Golledge 82 and a second for Moses completed the rout.

Manor came from two goals down at the break to defeat Forest at Southchurch Park. A Morais cross from deep found its way in to give the visitors the lead before Sagaf netted from the spot after he was found and it looked good for the visitors. However Manor stormed back after the break and reduced the arrears when Hopkins volleyed home from six yards out and it was all square when Lindfield fired home a rebound after an effort had come back off the bar. And Manor completed the comeback when Scott sent a free header into the net and give Manor a welcome win.

Woodford netted a terrific victory at Mile End against Sporting Bengal United. Asare put the visitors ahead in the 17th minute and two further strikes from the visitors had them three goals up after an hour. Sporting got one back but Mantovani sealed the win with a minute left to give the visitors the three points.

A goal in each half was enough to inflict defeat on Clapton and make it seven wins from seven in the division for Takeley. Zanone headed home at the back post to give Takeley the lead right on half time and they doubled their lead with a simple finish from Das. The game ended on a rather sour note though when Ebengo was sent off for The Tons as well as Spencer and manager Fowell from the bench, in an incident that saw the linesman having to be held back from the Clapton dugout by Takeley players in astonishing scenes. No doubt more will be heard on this in due course but it was ultimately another three points for the hosts.

Lodge won for only the second time in ten league games after a goal in the 25th minute saw them beat fellow strugglers Burnham Ramblers at Kitchener Road in Walthamstow in what was also the hosts first clean sheet of the season.

League leaders West Essex recorded only their second home win in six after seeing off Enfield at Mayesbrook Park. Macleod stabbed the hosts ahead three minutes into the second half and they doubled their lead on the hour when Mignot rounded the keeper and slotted home. Enfield did pull one back through Cosson with three minutes remaining however it wasn’t enough to prevent the hosts from taking all three points.