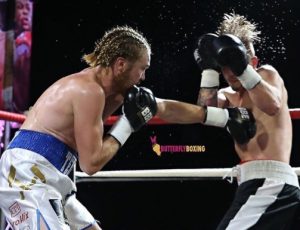 THURROCK’S Tey Lynn-Jones worked hard for a points victory on the MTK show in Brentwood at the weekend.

It was a fairly straightforward encounter against the Lithuanian boxer Deividas Sajauka who has had 43 bouts in his time.

It would have been easy for Tey to lose his focus as a scheduled opponent had pulled out but he showed discipline, dedication and an eye for the prize.

This makes it just one defeat in nine for a boxer who has such a positive attitude to his craft and is so generous in his praise for all his help that we look forward to his future fights.

After the bout, Tey spoke to FightTalk.Net about his plans for the future.(There is a few bad words in the interview below!).