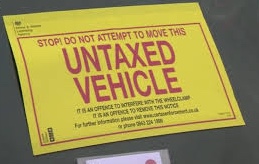 THURROCK Council has removed 38 untaxed cars from the borough’s roads in the first two weeks of operation.

As part of the council’s increase enforcement action through clean it, cut it, fill it, Cabinet agreed in June 2017 to give officers authority to remove untaxed vehicles from the public highway.

Officers attended a training course in September and were granted delegated authority by the Driver and Vehicle Licensing Agency (DVLA). These new powers came into force on 14 September and robust action has begun.

Owners of removed cars face charges for storage and to release the car. Unclaimed cars are destroyed after seeking permission from the DVLA.

Portfolio Holder for Environment, Cllr Aaron Watkins, said: “This is something the public has been crying out for. Untaxed cars which are dumped on our roads are a hazard and an eyesore.

“We are continuing to evolve clean it, cut it, fill it – this is one of the additional steps we are taking to clean up the whole borough and taking action against those who spoil it.”

Residents can check if a vehicle is untaxed by going to gov.uk/check-vehicle-tax