Tributes paid to former Tilbury councillor who has passed away 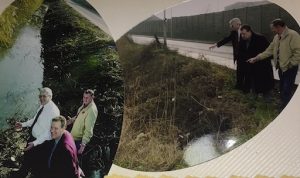 Andrew Mackinlay said: “I shall always be grateful for the great friendship and support that Kenny Barrett gave me as the member of Parliament.

“He was a friend to all. A very diligent councillor, who was very proud to represent Tilbury. Above all he had a great sense of humour.

“I recall the first occasion I met him. He was lying in a big bath tub full of Heinz baked beans, in the middle of Tilbury! Typically,he was collecting for a charity.

“Sadly, for many years he had to endure ill-health. He met the challenge with both courage and stoicism.

Former mayor of Thurrock, Carl Morris has also made a personal tribute.

Carl Morris said: “Kenny Barrett was Tilbury through and through, straight forward and straight talking. As a boy he was Tilbury Town’s first ever mascot – as a working man he became a hardworking and diligent Councillor in Tilbury; he always put Tilbury first.

“Kenny was elected in July 2002 in Tilbury Riverside following the death of his friend John Garner, and he continued John’s work for the Town and the community he loved.

“Kenny worked full-time until he retired and despite a series of strokes and continued ill health – which made his later years difficult, Kenny never lost his love of sport, Tilbury and the Labour Party.

“It’s the end of an era for Tilbury and for Thurrock. Kenny wasn’t old Labour or new Labour, he was solid, working class Labour. My thoughts and prayers are with Frances and his family at this sad time”.

The leader of Thurrock Council, cllr Rob Geldhill also paid a fitting tribute at a recent meeting of the Thurrock Cabinet.

Cllr Gledhill said: “I always had a tremendous amount of respect for Kenny. Despite being on “opposite sides” we would have great discussions.”

A minutes silence was observed.