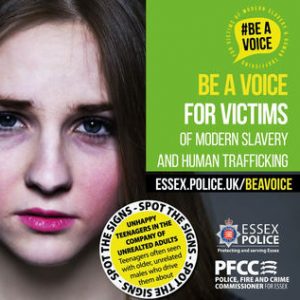 Called #BeAVoice, it aims to highlight some of the signs that people need to be aware of and how to report these crimes. Victims could be living or working nearby – often hidden and suffering behind closed doors.

Modern slavery includes people who are forced to work against their will or controlled by a so-called `employer’ who uses mental or physical abuse or the threat of abuse. Alongside forced labour, modern day slavery also includes crimes such as sexual exploitation.

Modern slavery is about power, dominance and control over vulnerable victims who are too scared or unable to seek help. Victims commonly do not have control of their money and owe large amounts to the abuser for housing, travel and food, so feel they have no means of escaping the exploitation.

Essex Police has a dedicated anti-slavery partnership co-ordinator, Cristina Gavrilovic, who has been working to improve people’s awareness of these crimes.

She said: “People think this type of thing doesn’t happen in their town or neighbour but it does. We are asking people to be aware, spot the signs and be a voice to victims who are extremely vulnerable and need our help.

“Traffickers have no boundaries or borders and they often target the most vulnerable, including children, those suffering from mental health problems or addictions, and homeless people.

“Victims of trafficking and slavery often speak little or no English, have no access to a mobile phone or their passports/ID documents and have very little concept of their current location, making them extremely vulnerable.

“This year we are focussing on asking residents to ‘look again’ for signs of grooming and exploitation among children and young people.

“We have a month of action that includes an awareness campaign and targeted operational work, which aims to shine a spotlight on these crimes and encourage people within the community to report any suspicions they may have so ultimately we can work alongside our partners to prevent and disrupt these crimes that exist within our communities.”