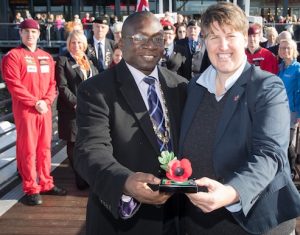 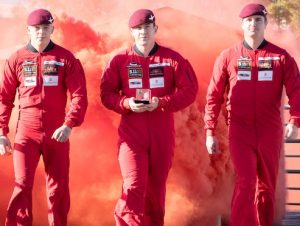 ON Friday 27 October, intu Lakeside launched the Poppy Appeal for Essex, with the Red Devils and Essex Royal British Legion handing over the first poppy of the county to Mayor of Thurrock, Councillor Tunde Ojetola. intu Lakeside partnered with its charity of the year, Treetops School, to hand back a poppy made by pupils that will be displayed at the Parachute Regiment, Colchester Barracks.

Mayor of Thurrock, Cllr Tunde Ojetola said: “It was a great privilege to attend this special event. There was a brilliant turn out of the young and the old to stand witness to see the first poppy of Essex being handed to intu Lakeside to launch the 2017 Poppy Appeal campaign. I very much look forward to seeing the ongoing good work from the Royal British Legion across Thurrock in the next couple of weeks.”

The Grays branch of the Royal British Legion, is currently selling merchandise and poppies in centre and will be partnering with intu Lakeside to host a remembrance service on Saturday 11 November with a minutes silence at 11am and local choir, Golden Voices singing war time classics in the central atrium.

Ben Leeson, marketing manager at intu Lakeside said “We’re delighted that intu Lakeside had the honour of handing over the first poppy of Essex. We’re very proud of our friends at the Royal British Legion Grays Thurrock Branch and all the great work they do. We look forward to welcoming our customers for our remembrance service on Saturday 11 November”