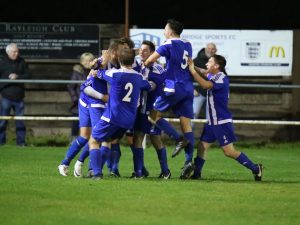 A late leveller from hosts GWR in extra time meant this tie will go to a replay at Theobalds Lane on Wednesday evening. Aaron Russell put the hosts into a tenth minute lead but saw the visitors level midway through the second half. And five minutes into extra time FCR went in front but four minutes from time Woodhouse netted for the home side to earn a replay in four days time.

A 92nd minute winner from Jimmy Cox sent Hullbridge Sports into the last 64 of the FA Vase in what was Rob Hodgson and Aaron Hunwick’s last match in charge of the club. The hosts took the lead midway through the first half when Sam Taylor’s cross was headed across goal for Charlie Buffin to slot home but in the 65th minute Wembley levelled when tapping home after a defensive slip. The hosts then retook the lead with thirteen minutes left through an own goal however just five minutes later keeper Jamie Merrells was shown a straight red after giving away a penalty, which the visitors converted. However just as it looked like extra time the ten men of Hullbridge won it when a cross found Cox who made no mistake, heading home at the far post, to end Hodgson and Hunwicks reign in a positive note.

Enfield came from behind to knock fellow ESL side Tower Hamlets out of the FA Vase at Mile End. The hosts took a 14th minute lead through Curtis Pond but just two minutes later the visitors levelled through Andy Tirivanhu and then with just over twenty minutes left Joe Clark put the visitors ahead. However the game ended on a sour note as after Hamlets had seen two sent off for second bookings, the 95th minute saw a melee and see another two red cards for the hosts and one for the visitors in rather unsavoury scenes at Mile End. However it is Enfield who progress into the Third Round.

A late Ryan Reed wonder strike saw The Tons pick up all three points in front of 273 at Cricklefield as the first ever Essex Senior League Ground Hop got underway.   The hosts created the first chance in the third minute when Ben Clarke curled a shot wide of the visitors post and on ten minutes Clapton’s Jerry Jairette flew out of his net to steal the ball away from Tony Cookey as the forward tried to go round the stand-in keeper.  Just past the half hour mark Side’s Euan Taylor-Reid flicked an effort over the bar after getting his boot to an incoming cross from Bradley Gayer whilst in the 36th minute Tons Aundre Spencer surged up the middle before trying his luck but fired into the arms of Will Hunt.  However six minutes before half time Clapton broke the deadlock when Jeffrey Cobblah scrambled the ball home from close range, but Barkingside managed to level the score on the stroke of half-time with a close range header from Toke, and it meant the sides went into the break all square. It didn’t take long for the next goal to arrive as early in the second half Ryan Reed sent a shot through keeper Hunt to restore The Tons advantage and for a time after that Clapton got on top, with Barkingside’s keeper Hunt pulling off two or three fine stops to keep the hosts in it.  And after Hunt had made a point blank save, the hosts broke and saw Michael Ogboin fire a shot into the bottom right hand corner to make it 2-2 and see this game level once again.  But the Tons and their large following weren’t to be denied victory when with only a few minutes remaining Reed curled a sublime effort into the top right corner from long range and see the visitors take the spoils at Cricklefield.

Ten man Manor came from behind to stun Basildon United at The Hive in their derby match. Luke Hornsley put the Bees ahead but saw the visitors level meaning the teams went in level at the break. Manor were then reduced to ten men before Hamid Zamani netted the visitors winner and gave Adam Peek his first win as Manor boss.

Lodge are off the bottom of the league after two Dwade James goals helped them overcome fellow strugglers Wick at The Old Spotted Dog. The visitors netted the opener midway through the first half when Mario Gnijaj netted at the back post and it was two on the half hour mark when James netted from the spot. Wick grabbed one back with twelve to go when Ibrahim Camara poked home but Jones capitalised on a keeper fumble with a minute to go and seal the points.

The Motormen saw off a spirited and determined Ramblers to continue their fine form in the league. Brian Moses nodded the home side in front on ten minutes, but just a minute before the break Fraser Inns nodded the visitors level. Moses restored the home sides lead when heading in a corner in the 63rd minute, and with five minutes to go Tommie Turner netted loose ball after Jacob Dingli had saw his effort saved to seal the home sides victory.

The Robins came from behind to take all three points against Stansted at Hargrave Park. Wis Baltazar put the hosts ahead early on but goals from Lewis Deamer, Billy Skinner and Toby Cleaver saw Sawbo take the spoils here.

Forest replace Walthamstow rivals Wadham Lodge at the bottom of the league after falling to defeat against Woodford Town at Kitchener Road. The visitors saw Asher Modeste put them ahead ten minutes before half time and just four minutes into the second period Ethan Kessel struck home after Modeste miskicked into his path to double the visitors lead. Two substitutes combined to bring Forest back into the contest with 67 minutes on the clock when Medina crossed for Creasey to thump home, however just two minutes later Kessel squeezed an effort through the keeper’s hands to restore the visitors two goal cushion which they maintained to pick up the points.

West Essex 2 Ilford 1 Hosts West Essex came from behind to defeat ten man Ilford at Mayesbrook Park. The Foxes took the lead on fifteen minutes when a nasty bobble deceived Josh French and his deflected clearance fell into the path of James Peagram who rammed home, but just six minutes later the game turned in favour of the hosts when Hardy found Woodbridge who lobbed the stranded keeper. And the visiting keeper was given his marching orders soon after for dissent following the equaliser. And midway through the second half the hosts netted the winner thanks to a bobbled effort from James Bromley and collect a very welcome three points.