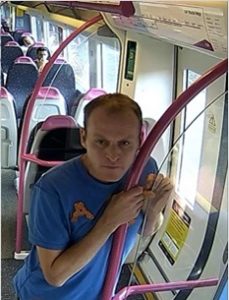 POLICE Officers would like to speak to him in connection with an assault against two young boys.

The incident happened on Thursday 31 August at around 5.20pm on board a C2C service between Chafford Hundred and Upminster.

During the journey, the man was seen to assault two boys he was travelling with a number of times, including kicking one of them in the stomach and then pushing another, causing him to fall forward.

The man got off the train at Upminster and the children left the train with a woman who they were also travelling with at the next stop.

Enquiries have been ongoing since the incident and officers are now trying to identify the man shown in the CCTV images, as he may have information which could help the investigation.