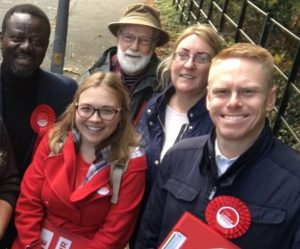 THE Thurrock Labour Party has reacted with scorn to the Conservative Government’s budget announced on Wednesday. In a budget containing few crumbs of comfort for Thurrock residents struggling to get by, the Tory Chancellor, who recently claimed ‘there are no unemployed people’, revealed the economy was forecast to do worse than expected yet again.

Responding on behalf of the Thurrock Labour Party Councillor Jane Pothecary said “another year, another appalling if unsurprising display of monumental incompetence by the Tories. Just when you think their handling of the economy can’t get any worse they find new ways to fail the British people. No matter how low they set the bar for themselves the Tories seem incapable of hitting their economic targets.”

“While other major economies are enjoying the good times the Conservatives have managed to spectacularly hamstring the British economy. The budget revealed that the Tories’ cuts to the economy are giving us the slowest forecast growth in modern history, the worst decade for productivity since 1812, and a total wait of 17 years until wages return to their peak level under the last Labour government.”

“What makes this even worse is that the Tories still aren’t managing to get to grips with the deficit, which was supposed to be the reason for the cuts closing NHS walk in centres, police stations and children centres across Thurrock. We are now told that the budget deficit will not be eliminated until 2031 – that’s 16 years late!”

“Even if the Chancellor can’t understand the evidence in front of him, it is now clear for everyone else to see that the Conservative Party are flailing around with no idea how to manage the economy. After years of stagnating living standards many families across Thurrock will be struggling this Christmas thanks to the Conservatives’ failure. We cannot afford for this to keep going on and the sooner we see the back of this ‘government’ the better for everyone in Thurrock.”