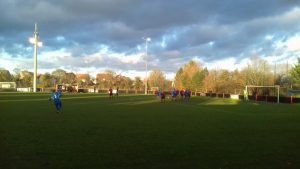 Hamlets  finally saw off a stubborn Wick at Mile End to bounce back after two successive defeats. Curtis Pond put the hosts in front but Wick managed to level after the break through Hassan Nalbani. Pond then fired Tower Hamlets into the lead once again. But Wick fought back to level again through Jeff Idemudia before Daniel McCarthy netted the winning goal to secure a Tower Hamlets victory.

Billy Johnson and Jay Nash were the goal scorers  as Rovers picked up another three points with victory over Barkingside at Cricklefield. Barkingside are now fourteenth  whilst Rovers are in third.

The points were shared at The Old Spotted Dog as Clapton and Ilford played out a draw. After a feisty first period the hosts took the lead with a close-range finish from Jeff Cobblah but the Foxes earned a point thanks to a screamer from James Peagram, leaving The Tons in sixth and Ilford in eighth.

FC Romania remain in fourth after a five goal thrashing of Enfield at The Harlow Arena. The visitors were two goals up inside the opening half hour as Mihai Botosan and George Taban  both hit the target. Adrian Balsanu added a further strike just past the hour mark before two stoppage time goals from Ionut Juganu and Sergiu Pitaru saw the visitors hit five.

A brace from Brian Moses plus goals from Martin Tuohy and Eljay Worrell saw Redbridge to yet another three points as their incredible run continued as they dismantled Sawbridgeworth Town at Crofters. The Motormen have now opened up a five point cushion at the top whilst the Robins, who netted a late consolation in this one, are now in 17th.

Darren Manning picked up his first win as Hullbridge boss as he saw his side produce an excellent performance to see off local rivals Southend Manor at Southchurch Park. The hosts did take a 20th minute lead when Rhys Fatt slotted home but the visitors levelled in the 34th minute when ex Manor midfielder Ash Pibworth drove home before he added his and Hullbridge’s second, tapping home a corner at the far post three minutes before the break. Fatt then got his second of the contest, heading home at the far post to bring the hosts level on the hour mark, but seven minutes later Salako converted at the far post to restore the visitors lead before skipper Jimmy Cox grabbed a fourth for the Bridge with eleven minutes remaining and see his side earn a huge three points.

A goal in each half saw Sporting Bengal United pick up a much needed win at home to West Essex at Mile End. David Vaughan netted right on half time before Oscar Mendes doubled their lead with fifteen minutes remaining. That’s four points from two games now and sees the Bengalese side in twelfth  whilst West Essex are in ninth spot.

Burnham came from behind to smash Stansted at Hargrave Park and end a rather dismal run of defeats in the process. It looked like another long afternoon when Wis Baltazar put the hosts ahead after twelve minutes and when the hosts were awarded an 18th minute penalty it looked bleak. However Nick Brown missed the spot kick and from that moment on things changed as the visitors levelled ten minutes before half time and then three second half unanswered goals gave the Leslie Field side a superb win.

Forest stunned Takeley at Kitchener Road to record their second win in three games. Abiolo Tanimowo put the hosts ahead after breaking through and lifting an effort over the onrushing keeper, and after the hosts had seen Takeley hit the woodwork twice, sealed the deal eight minutes into stoppage time when Mo Sagaf played a one two with Tanimowo before slotting home and consigning  Takeley to a rare defeat. Takeley  are fifth in the table,  eight points behind leaders Redbridge.

Lodge’s revival under Marc Farrell continues to roll on after his side netted four more goals in victory at Goffs Lane over a tough Woodford Town outfit. It means the visitors, who not so long ago were in danger of being cut adrift at the bottom, are now up to 13th and only six points off a top ten position. For Woodford it was a disappointing day and they remain just above Lodge in eleventh spot. Eli Benoit, Mario Gnijaj, Dwayde James and an own goal provided Wadham with their scorers, while Woodford Town were gifted an own goal with Asher Modeste notching the other.