MICHAEL O’Reilly, a former apprentice at the Royal Opera House Bob and Tamar Manoukian Production Workshop in Purfleet, has been using his artistic skills to help brighten up hospital rooms.

Artist Michael, who now works freelance for the Royal Opera House, became involved with the charity Hospital Rooms when he undertook a placement with them during his scenic art apprenticeship. His involvement has continued and he has just completed a wall painting in the Dining Room of Garnet Ward for older people at the Highgate Mental Health Centre, in London.

Hospital Rooms is a mental health charity that believes in the enduring power of the arts to instil in people value, dignity and wellbeing. It’s aim is to try to remove the barriers that limit access to art and culture for people using mental health services.

Talking about his work with the charity, Michael said: ‘My scenic art apprenticeship with the Royal Opera House has equipped me with a breadth of skills that I was able to draw upon whilst painting for the charity Hospital Rooms. In the ROH workshop we regularly scale up designs onto a large scale, grid out, accurately draw and make an array of painted effects. 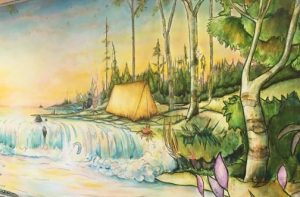 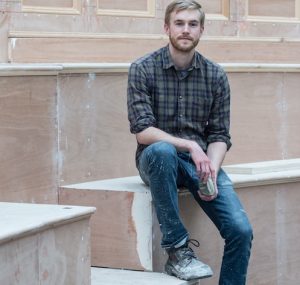 These were the kinds of skills I was using when painting on site. When coming up with ideas for both murals I was keen to use techniques I had seen in the workshop. In the first project I repeated a floral wallpaper motif by pouncing two different drawings several times around the room. This is where you rub charcoal through dotted holes made along the lines of your drawing. It is an effective way of repeating the exact same image numerous times. During the second most recent project I used broken sponge rollers to create soft organic shapes and added scumble glaze to my paint, which slows the drying process and allows you more time to push the paint around.

Emma Troubridge, Head of Scenic Art at the Royal Opera House said; ‘It’s great to see one of our apprentices using the skills they’ve leant for such a good cause. Michael is a very talented artist and his work will undoubtedly make a connection with people and help their wellbeing. We are very proud of him.’

For more information about the charity, please go to www.hospital-rooms.com. To see the Royal Opera House scenic artists and craftspeople at work, take a tour of the Royal Opera House Bob and Tamar Manoukian Production Workshop. Find out more by going to www.roh.org.uk/thurrock or calling 020 7304 4000.