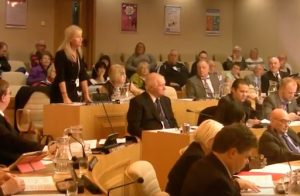 A THURROCK UKIP councillor was arrested after a disturbance in Horndon-on-the-Hill.

An Essex Police spokesperson said: “Police were called to a disturbance in Horndon Road, Hordon-on-the-Hill, at around 2.55am on Sunday, December 10.

Officers attended and arrested a 56-year-old woman on suspicion of common assault.

“She was later released without charge”.

YT spoke to the deputy leader of UKIP, cllr Roy Jones who confirmed that the woman in question was Belhus councillor Angela Sheridan.