SPORTS Direct has reported a fall in sales in its core UK retail business as it pushes through a shake-up aimed at taking it in a new upmarket direction.

Boss Mike Ashley said the strategy was delivering “spectacular trading performance” at its flagship stores – and that it planned to open 10 to 20 more of these next year reports Sky. 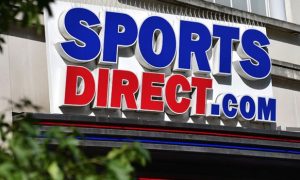 But other sites have been closing and online promotional activity has been scaled back, contributing to UK sports retail sales in store and online falling 1.4% to £1.12bn in the six months to 29 October.

Shares fell as much as 7% in early trading.

The business also took a hit to its profit margin as it made provision for extra stock and counted the cost of the weak pound – which has driven up the price of imports.

Reported pre-tax profits for the half year were down 67% to £46m though this included the effect of one-off accounting adjustments and asset sales in the same period in 2016.

Newcastle United owner and Sports Direct boss Mike Ashley arrives at the High Court in London where he expected to give evidence in a trial in which he is being sued by a finance expert who says Mr Ashley reneged on a £15 million deal.

Mr Ashley, the colourful tycoon who owns the majority of the business and is also its chief executive, has previously described his ambition to turn Sports Direct into “the Selfridges of sports retailing”.

The plans involve opening smarter-looking stores in city centres showcasing premium products from the likes of Nike and Adidas and better competing with rival JD Sports.

“We intend to open between 10 and 20 new flagship stores next year.”

Openings will take place in locations such as Leicester, Watford and Thurrock, Mr Ashley added.

He said the business was on course to deliver its target for full-year underlying earnings growth.

Sports Direct has come under fire over alleged “Victorian” working conditions at its Shirebrook warehouse, prompting it to implement a series of workplace and pay reforms.

Mr Ashley said in the latest update that he was confident that improvements made over the past 18 months “have made a positive difference” and that it would continue to monitor working practices “to avoid complacency”.

The company appointed Alex Balacki, a workers’ representative elected by staff, to the board earlier this year and it said his inaugural period would be extended by a further year, to be followed by a new staff election.

It said it had “accepted a number of recommendations” from Mr Balacki and would provide an update on these “in due course”.

The half-year results come a day after independent shareholders rejected a proposal by Mr Ashley to pay his brother £11m.