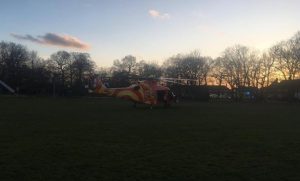 A MAN who died in South Ockendon after he is believed to have been assaulted has been named locally as George Cunningham.

It is believed the victim was assaulted by two men who made off from the scene in a car, described as silver or light-coloured.

Investigations are continuing into the death of a man in South Ockendon yesterday (Thursday, December 14).

The victim, a man in his 50s, was assaulted near Dilkes Park in Foyle Drive shortly before 3pm.

Sadly he was pronounced dead at the scene.

A forensic post-mortem is due to take place today.

Detective Chief Inspector Martin Pasmore, from the Kent and Essex Serious Crime Directorate, said: “We are continuing to conduct house-to-house enquiries and study CCTV from the area.

“We are keen to trace two men leaving the area in a silver or light-coloured vehicle.

“If you saw the vehicle, either before the incident or after it, I need you to contact us.

“There were a number of vehicles that passed the scene at the time and I’d urge anyone who may have dash cam footage to come forward too.”

If you have any information about the incident please contact us on 101 or email scd.appeals.essex@essex.pnn.police.uk.