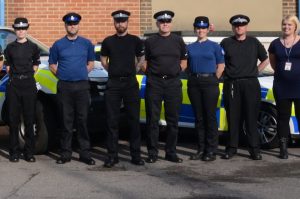 NOVEMBER was another busy month for Thurrock CPT, with PC Neil Brand starting off the month by completing a partnership patrol with one of Thurrock Councils anti-social behaviour officers on November 2nd, visiting several areas across Thurrock.

Operation Pumpkin continued to keep officers busy on November 5th, with numerous fireworks being seized for destruction, and offenders of anti-social behaviour being dealt with.

PC Rowan Perrior assisted Thurrock council Environmental health officers execute a warrant at an address in Purfleet on November 8th, seizing audio equipment which had been used to cause a nuisance.

Operation Cuploa was a joint agency warrant with Thurrock Council and our Neptune officers on November 9th, dealing with reports of economic crime. Two people were arrested for money laundering offences.

On November 9th we completed a professionals meeting followed by a multi-agency walk through Purfleet, looking at a joint action approach to combatting reported issues of anti-social behaviour.

Operation Brave was created so that our officers were able to attend several Remembrance parades, laying wreaths and paying their respects around the district, starting with Purfleet on November 5th, Orsett on November 11th and Grays, Stanford le hope, South Ockendon , Chafford Hundred and Chadwell St Mary on the 12th. This is always a humbling event that officers feel honoured to take part in.

Our CYP (Child and Young persons) officer PC Pete Kittle and Missing Persons Liaisons officer Donna Gingell completed a day of action on November 13th attending care-homes across Thurrock to give advice to youths and carers.

PC Paul Glensman located and seized a scooter being ridden with no insurance or MOT on November 15th, ensuring that yet another potentially dangerous vehicle was removed from our roads.

The team were on our ongoing nuisance motorbike patrols, Operation Sacrifice on November 19th, when PCSO’s Garry Woolford and Kelly Roberts issued section 59 warnings to offenders in Stanford and Orsett heath.

Operation Borderland was a joint partnership operation, with Thurrock Council and our Active citizens assisting us in patrolling areas in Purfleet identified as anti-social behaviour ‘hot-spots’ by our earlier patrols. This operation took place on 20th, 21st and 30th November, and an arrest was made for drug related offences.

PCSO’s Kelly Roberts and Garry Woolford located a group of males in possession of cannabis in Little Thurrock on 26th November, and all 7 were issued cannabis warnings.

Also on November 26th our CYP officer PC Pete Kittle interviewed a young person from Stanford Le Hope who made a number of admissions to offences. The investigation into the offences is ongoing.

Thurrock Volunteer Police cadet Jasmine Collier attended the full-council meeting at Thurrock Councils chambers alongside leaders Sergeant Lee Stannard and JoJo Mitchell to be re-presented with the Essex Police cadet of the year 2017 award by Mayor Tunde Ojetola. We are all very proud of Jasmine and her achievements in the scheme.

The team managed to secure a fantastic result on November 30, when a male was arrested for sexual offences in West Thurrock. The entire team played a part in this investigation, from interviewing witnesses and victims, deterring further offences through patrols and identifying, arresting, interviewing and securing charges on the suspect.

Share
Facebook
Twitter
Linkedin
Email
Print
Previous article
Football: Aveley go down by single goal at Witham
Next article
The Good Doctor Blog: The Gift of Christmas Is About Giving