Share on Facebook Follow on Facebook Add to Google+ Connect on Linked in Subscribe by Email Print This Post
OFFICERS investigating a knifepoint robbery have released an efit of a man they want to speak to.
A man approached a 29-year-old woman in the car park of Morrisons in High Street, Grays, and offered a laptop and mobile phones for sale.
She went with him to a parked Ford Fiesta to view the items. A second man was in the car.
When the victim opened her purse, she noticed he had a knife in his hand. The man then took a three-figure sum of cash from her purse and the car drove off. 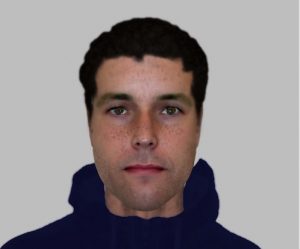 Enquiries have been ongoing and we are now in a position to release an efit of the first man. He was described as aged around 30, around 6ft tall and wore a navy blue tracksuit hooded top with a zip.
The man with the knife was described as white, about 35 years old, of large build and with short dark blond hair.
The incident was at 11.25am on Saturday, October 28 and it is believed the suspects had previously approached other people in the car park.
Contact Grays CID on 101 quoting reference number 42/153318/17.
Alternatively, contact independent crime-fighting charity Crimestoppers anonymously on 0800 555 111 or www.crimestoppers-uk.org.