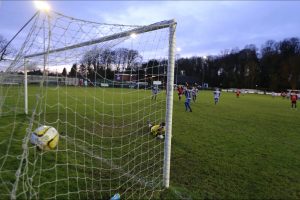 Sports are out of the Vase yet again at the last 32 stage after an inept second half showing saw the hosts net four second half goals. The visitors fell behind in farcical circumstances when after Harley had saved, full back Shaun Coe struck his clearance straight at Gus Douglas and the ball flew off him and into the net on twelve minutes. Sports though were well in the match and saw Michael Salako strike the bar, but the second half began poorly as after losing the ball on their own wing, a ball in found home substitute Jack Read who side footed home. And just before the hour mark it was three when a slip allowed Chris Vardy to sneak in to score, and although Bridge briefly threatened a comeback when Jimmy Cox netted a 65th minute spot kick, this was snuffed out six minutes later when poor marking allowed centre half Mark Riddick to waltz into the six yard box and nod home a corner. And the hosts capped a fine second period by netting a late fifth when a tidy one touch passing move ended with Max Hercules finishing well and help send his side through in style.

A late header saw West Essex take a point at The Hive against Basildon United. Luke Hornsley had put the hosts ahead but a header five minutes from time from Josh Kane saw the Mayesbrook Park side take a point.

Side got their 2018 off to a flyer by ending a long losing run by smashing five past a previously in form Burnham Ramblers side at Leslie Field. Roddy Lemba bagged a brace, with Ryan Imben and Mattheus Santos also chipping in plus an own goal adding to the tally. Ramblers replied via Karl Swanborough. It means Side are out of the bottom four whilst Ramblers remain eleventh.

Rovers netted twice inside the opening twenty minutes to take the points at The Old Spotted Dog against struggling Hackney Wick. Jay Nash broke the deadlock on eight minutes before Stephen Butterworth doubled that lead on twenty minutes, which helped Rovers seal another three points.

Ilford 0 FC Romania 2 FCR are now just four points behind leaders Redbridge after they took all three points against Ilford at Cricklefield. George Taban opened the account in the 34th minute with Florin Pop sealing the victory in the second half.  It leaves the Foxes in ninth spot.

Today’s match at Oakside was postponed due to storm damage at the ground.

A great second half performance from the Robins saw them see off Sporting Bengal United and pick up the three points at Crofters. Toby Cleaver converted a 43rd minute spot kick to set them on their way, and although Sporting levelled with a good passing move being slotted home by Ashaan Siddik, Sawbo were back in front courtesy of an Aaron Thomas belter. Toby Cleaver then added another to make it three for the hosts before Billy Skinner chipped over the visitor’s keeper to seal a welcome win for the hosts.

Today’s match at Station Road was postponed due to an unplayable surface.

Hamlets began 2018 with a terrific home win over Enfield at Mile End. Wale Odedoyin put them ahead after just three minutes before a late double from James Ross sealed the deal for the Mile End side. The hosts are eighth whilst Enfield slip back into the bottom four.

Forest are now six unbeaten after an early goal from Abdoulai Njai was enough to defeat Clapton at Kitchener Road in Walthamstow. The win sees Forest in fourteenth place whilst Clapton remain in sixth spot.