Hornchurch Take The Points At Parkside 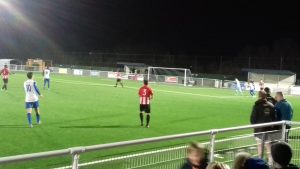 A bumper crowd of 398 turned up at Parkside on a crisp winter evening to see Aveley take on Bostik North leaders AFC Hornchurch. Aveley went into the game having been winless over the Christmas period whilst their opponents opened the New Year with a 4-3 home defeat at the hands of Brentwood Town.

Both teams took a while to get into their stride as neither side were willing to let the other dominate in the opening exchanges. A Russell Malton delivery to Alex Teniola suddenly created an opening for the Millers but Teniola couldn’t keep his shot down. Max Bradford then went close with shot that just whizzed the wrong side of the left upright. However the Millers found the Urchins defence water-tight; even when they did find a way through Sam Mott rushed off his line to mop up, denying Teniola in the process.  A swerving Robbie Rees shot bent just wide was the best of the Aveley chances.

The Urchins rearguard had been leaky on New Year’s Day but were back to their usual solid state, marchalled by Nathan Cooper with Jamie Hursit, Jay Porter and Kenzer Lee all doing their bit to keep to stunt Aveley attack. However at the same time the Urchins hadn’t penetrated the Aveley box until they sprang into life in the 28th minute. On that occasion George Purcell found his way into the box blocked by Connor Witherspoon and Myles Keizer-Burrows who both harried the Urchins talisman, denying him an opportunity to fire off a shot. Purcell however played the ball out to the left flank where Matthias Fanimo was waiting;  he swiftly centred to Nathan Livings whose shot clipped the post. Witherspoon had to head away a dangerous cross, then former Miller Olu Oluwatimilehin thumped a long-range effort narrowly over. Hornchurch having made a slow start were now having much more possession and nearly broke the deadlock in the 39th minute when Fanimo dinked a shot over; then the Urchins saw Purcell miss a golden opportunity when  a ball landed at his feet,  but he wasn’t able to get a clean connection and dragged his shot wide.

Aveley ended the half with two free kicks; and it was from one of them that caused the break away from which the Urchins opened the scoring. Lewis Gard’s free kick was caught by Mott who kicked it out, launching a fast-paced counter offensive which ended up being swept across the Aveley box with  Fanimo ramming the ball home to give the Urchins the lead a mere few seconds before the interval.

The Millers may have gone a goal down right at the end of the first half but they didn’t dwell on that too much; they went straight at the table toppers from the start of the second period with Witherspoon firing over after some nice play from Max Bradford. The Millers kept the ball well at times and did have a bit more of the possession but the Urchins are top for a reason – their defence marshalled by Cooper kept everything out as Hursit, Porter and Lee worked in tandem to stem the Aveley flow. Added to that the Urchins  looked dangerous on the counter which at times tested the Millers defence. However a Fanimo cross from the left failed to reach any Hornchurch players as it pinged across the Aveley goalmouth; and then a ball from the right flank reached a similar conclusion. Purcell though missed a sitter after Fanimo chased down a ball that resulted in Madden and Witherspoon clattering into each other, laid it off to Purcell, who then missed the target.

After that let off the Millers then had another go themselves with Gard and Teniola both having shots blocked. The Millers even spurned a good opportunity to equalise as Teniola could only rifle of a tame shot which Mott easily saved; had there been a bit more power  the Urchins keeper may have been picking the ball out of the net.

Purcell had a header hit the cross bar, but Aveley showed some solid defending as McKenzie headed the rebound goal wards but Russell Malton cleared the ball off the goal line. The hosts were soon up the other end with a dangerous cross only being cleared as far as George Doyle, but his powerful follow up shot was brilliantly tipped around the post by Mott.

Aveley kept at the task and peppered the Urchins box as the game came into the final stages. The Urchins stood firm, defended resolutely before launching another counter attack which ended in Theo Fairweather-Johnson getting into the Aveley box and slotting past Madden, sealing the win only a few minutes after coming off the subs bench.

Aveley were probably worth a share of the spoils but the Urchins were decisive when they had to be and they made up for their stuttering New Year performance as they posted their first win of 2018.