THE LANDLORD at the White Hart Inn pub in Grays says the Golliwogs that are draped all over his bar are set to stay in defiance of possible action by Thurrock Council. 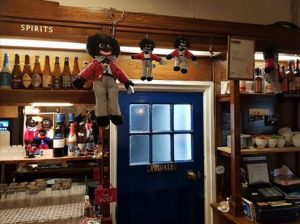 Chris Ryley put a number of golliwogs in the main bar area of the Argent Street pub some time ago.

But he has now had a complaint and Thurrock Council are investigating.

A defiant Mr Ryley said: “This is the first complaint in three years. Nobody approached me personally. Instead they went to the police and the council.

“They have done me a big favour really. I have had lots of new visitors to the pub to see what the fuss is about.

Customers donated the dolls and that is what they are: dolls. They are staying.

A spokesperson for Thurrock Council said: “Thurrock Council received a complaint last week (Thursday 8 February) about items being displayed in a local pub. It is currently being investigated and therefore it would be inappropriate to comment further at this time”.

Once a common sight on everything from Robertson’s jam jars to Noddy storybooks, increasing backlash over their alleged racist origin has meant golliwogshave faded from view and have now all but disappeared from public display.

Last year, the Edinburgh Museum of Childhood was put under pressure to remove a display of golliwog dolls in its collection.

Golliwogs are based on the character of the same name who featured in a series of late 19th century children’s books by American author Florence Kate Upton, who in turn said she based the character on a figurine.