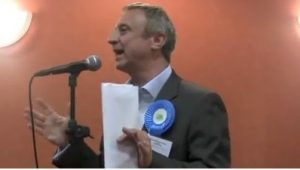 A FORMER Conservative councillor for Ockendon is set to switch to the ward of Orsett in May’s local elections.

Brandon Groves resident, Barry Johnson lost his seat to UKIP in 2016. Many had anticipated that Mr Johnson would fight to regain the seat in May or even in the by-election in March.

But Ockendon has been the quintessential swing seat in local elections over the years with Labour, Conservatives and Ukip all grabbing seats whilst Orsett has been solid blue.