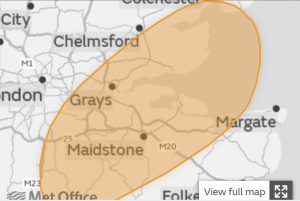 Based on advice received by Network Rail regarding severe weather conditions expected from Monday, the last c2c trains will run significantly earlier than normal on Monday 26 February.
If you are planning to travel on Monday night please check for details before making your journey.

A normal timetable is planned until 21.00, after which some services will be altered or cancelled. The last train on each section of the route will be as follows:

Further alterations and changes to services are expected to be necessary on Tuesday 27 February and are also a possibility later in the week. Details will be announced on the c2c website as soon as they are confirmed.

We are sorry for the disruption this will cause if you had planned to travel on Monday night.

THERE is now very high confidence that Essex, along with the rest of the region will experience very cold conditions and disruptive snowfall from this Sunday (25th February) which may well last into the middle of next month.

Impacts are likely to be greater than normal due to air temperatures remaining below freezing both by day and night for a lengthy period and frequent snow showers arriving from the North Sea. There is also the risk of significant snow at times from low pressure systems skirting along the English Channel.

A severe weather warning (Heavy Snow) has already been issued by the Met Office affecting all districts of Essex and East London starting 16:00 on Monday and expiring 23:55 on Tuesday.

Go to https://essexweather.org.uk/severe-winter-weather/ for further details.

Road users in the North East of England, Midlands and the East of England are being advised to check the weather forecast and road conditions before travelling on Tuesday 27th February as significant levels of snow are forecast and Highways England has issued a severe weather warning.

A band of snow is expected to affect parts of the network through Tuesday morning. The snow is expected to come into the north east through the very early hours of the morning, affecting the East Riding of Yorkshire and North Lincolnshire, before gradually progressing south west towards Birmingham and the West Midlands conurbation, Leicestershire and Nottinghamshire, falling at all altitudes including sea-level. Areas are likely see 2 to 4 cm with some roads potentially seeing 5 to 10 cm of snow in just a few hours (most likely across South East Yorkshire, Lincolnshire and Nottinghamshire). Strong winds may lead to some drifting of snow and a severe wind chill is likely. As the snow tracks to the south west, it will lessen in intensity and become more showery in nature.

Highways England is working closely with the Met Office monitoring the latest weather conditions with snow expected to affect the road network during Tuesday.