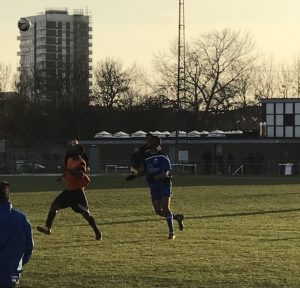 Goals from Marcus Bowers and Tommy Barton saw The Bees take all three points at Cricklefield against Barkingside.  Bowers, who came on as a substitute for the injured Charlie Kendall only three minutes before, headed home a Joe Skeels free kick in the 44th minute; and then with four minutes remaining Barton headed home a second for the Bees to seal the points and see them maintain fourth spot.  Defeat for the hosts sees them in 15th, just three points above the bottom four.

FCR are now top of the tree after they came from behind to defeat West Essex at Theobalds Lane.  The opening half hour saw the visitors create the best chance when Michael Mignot’s header just went past the post, however five minutes before the break Tom Macleod fed James Bromley who lifted the ball over the keeper to give the visitors the lead.  Romania fought back to level on half time though when a Florin Pop shot trickled across the goal and dropped in off the post. The Wolves went on to take the points as Sergiu Maximov and Vladut Sighiartau hit the target in the second half. West Essex are 9th after this result.

Lodge will be the happier after they held Hullbridge to a gritty 2-2 draw at Lower Road.  A quiet goalless opening half, which saw the hosts waste several good chances, then saw a second half that produced four goals.  The deadlock was broken by the visitors five minutes into the second period when Danny Francis lobbed Jamie Merralls, however the hosts levelled just four minutes later when Callum Ibe rounded a defender before firing past Chapman.  And just past the hour mark Sports grabbed the lead when Luke Hornsley laid in full back Matt Rose who slotted past Chapman, but the visitors found an equaliser in the 71st minute when Abdoulai Njai fired an effort beyond Merralls into the far corner.  A frustrating day for Hullbridge then who remain in the bottom four although do go above Burnham Ramblers into 18t. Wadham Lodge meanwhile remain second bottom, two points further back.

Ilford put in a solid performance to see off Southend Manor at Southchurch Park, maintaining their 7th position in the table.  For Manor it was a poor day at the office, and they remain in 12th spot, only seven points above the bottom four.  George Whitelock, Liam Burgess and a gifted own goal were the sources of the Ilford goals. There was some positive news for the club though as Ellis Skidmore, who suffered that terrible injury against Hackney Wick last week, has undergone surgery and is now starting his recovery; no tendon damage which is great news. We now wish him well over the coming weeks and the club look forward to having him back in a Manor shirt in the near future.

Goals from Luke With and Wale Odedoyin saw Tower Hamlets overturn a half time deficit into a win against Stansted at Mile End.  The visitors took the lead midway through the first half when Olly Fortune stuck home with his left foot to make it two goals in as many games, however With headed Hamlets level in the 57th minute before Odedoyin netted a stoppage time winner to hand the hosts all three points, lifting them into 8th above West Essex.  For Stansted, it’s another defeat as their great start to 2018 is now a distant memory, and they are now 14th and just four points above the bottom four.

Enfield are up to 13th now and five points above the bottom four after they continued their recent fine form with victory at Kitchener Road against Waltham Forest.  Ayo Odukoya put the visitors ahead in the 14th minute but saw Christian Owusu level for the hosts eight minutes before half time.  But just before the hour mark Dan Chambers netted what proved to be the winner for the Harlow based side, and it leaves Forest still just one place and two points above the bottom four.