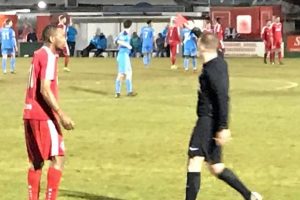 A DISJOINTED and lack-lustre East Thurrock United ended up well beaten at Vauxhall Road on Tuesday evening when the margin of victory for the play-off-chasing Vanarama National League South hosts might have been larger but for heroics from Rocks keeper Lukas Lidakevicius and a couple of shocking misses.

Having said that, East Thurrock did make a decent start and for a spell threatened to spring something of a surprise and they were certainly on the wrong side of some poor decisions by referee Dean Hulme who went on to produce one of the comedy moments of the season – though Rocks were hardly laughing!

The opening stages saw some bright play from East Thurrock and with a little more composure around the box they might have made more of several half chances, though home keeper Laurie Walker was only called upon to make one significant save, with his legs from Sam Higgins’ shot.

Hemel always appeared to be on the cusp of finding an opening goal and as they took charge of the match Lidakevicius was increasingly called upon to keep them at bay. Despite a couple of diving saves he was finally beaten on 33 minutes when the ball fell for Jordan Parkes who crashed the ball home from the edge of the box.

Having conceded, it was important for East Thurrock to steady the ship but their Nemesis this season has been the closing moments of the first half and sure enough they capitulated again on 41 minutes. Ismail Yakuba had only just headed over when it seemed more likely he would score but from the next attack Spencer McCall delivered a ball across the face of goal and one time Arsenal prospect Herschel Sanchez Watt produced an accomplished close range finish.

And Rocks ought to have gone into the interval three down but for an astonishing headed miss by David Moyo who headed wide from barely a yard out with the goal at his mercy.

Rocks were marginally better in the opening stages of the second half, without ever really threatening a comeback goal and they might well have gone further behind but for more decent saves from Lidakevicius.

They also found themselves on the end of some strange decisions by Mr Hulme, who cautioned three Rocks players for fairly innocuous fouls, yet let Hemel’s players off with warnings, including a bizarre decision not to caution Watt for a very poor studs up challenge from behind on Sammy Knott.

It appeared Watt had got his just desserts on 76 minutes when Mr Hulme cautioned him for kicking the ball away, then showed him a red card, apparently for dissent. Watt stood his ground, called over captain Parkes and then Mr Hulme rescinded his decision. It appears he had asked the player for his name, and took the repeated answer “Watt” as dissent! It was an embarrassing moment for the official who had a very poor night overall, though it would be churlish to suggest he was to blame for East Thurrock’s demise – that was their own responsibility.